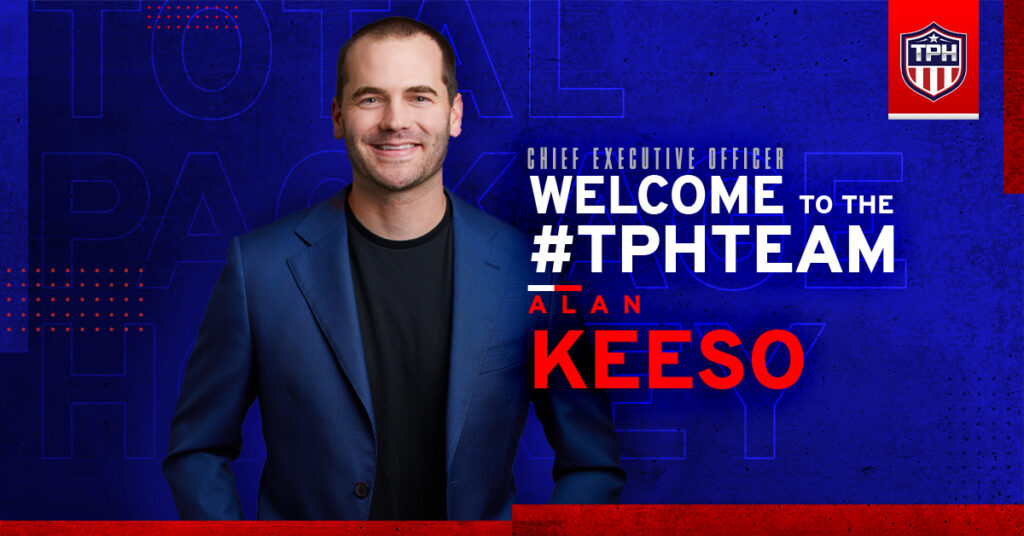 Alan Keeso Named CEO as TPH Looks to Next 20 Years

(Nashville, TN – December 15, 2021) – TPH is excited to announce Alan Keeso as its new Chief Executive Officer, effective January 1, 2022. Having served as Strategic Advisor to TPH over the past 5 years, Keeso brings in-depth knowledge of TPH and its Center of Excellence (CoE) academy model, its team members, and culture.

“We’re so excited to have Al lead our team going into our next 20 years at TPH,” said TPH founder Nathan Bowen, who will move out of the CEO role and into the Chairman role, remaining heavily active in TPH. “Having celebrated TPH turning 20 years old this year, we are absolutely pumped about what’s to come as we strive to lead the world in positively impacting the lives of student-athletes. Al is the leader to help us scale that impact.”

In addition to consulting for TPH in recent years, Keeso has helped dozens of small and medium-sized businesses grow for over a decade as a management consultant, independently, as well as through Grant Thornton and BDC. When asked early in 2021 by Bowen and his Investing Partner Taso Sofikitis to work more closely with TPH, Keeso decided to make the move with his family to Nashville.

“TPH to its core is a purpose-driven organization, with an outstanding team of committed professionals,” said Keeso. “It’s an honor to have this kind of confidence from Nathan and Taso to take TPH to new heights, and the responsibility that comes with the CEO role to the TPH team and our student-athletes is something I take very seriously. We’re a team that’s poised for growth through our Center of Excellence Study/Train/Play academy model, association management, camps and clinics, The Prospect Exchange, prospects teams, and events, now featuring Champions League Hockey in partnership with World Hockey Group. All of these efforts and their growth will enable us to positively impact the lives of a greater number of student-athletes, not only at our current locations, but also at many new locations to come. The future is bright at TPH.”

Keeso’s own journey as a student-athlete, and ensuing career, lend perspective to what Bowen believes will continue to differentiate TPH to prospective partners as well as families weighing the incredibly important decision on where to have their children develop as students, athletes, and people.

“Al has not only been an aspiring elite student-athlete, who reached levels in hockey that many TPH student-athletes are working towards daily, but he also exemplifies to our families what the bigger picture can be when lessons learned from sports are applied beyond the game,” said Bowen. “That’s what TPH is all about, and that’s what we feel differentiates us; we prepare our student-athletes not only for the next level in their sport, but also mentor them on habits that will help them experience wild success on the ultimate journey – life. With Al’s leadership, that differentiator will only get stronger.  He has lived the ups and downs the game can throw at you and is an incredible role model for young aspiring student-athletes because he never quit and he has used those tough times as motivation and lessons learned to prepare for the next challenge in life and hit it head-on in pursuit of the next success.”

In addition to a successful business career, Keeso has earned two master’s degrees – an MBA and an MSc in Biodiversity, Conservation, and Management – from the University of Oxford. At Oxford, he also published a working paper, took to the TEDx stage, and was the goaltender for the university’s historic ice hockey team, becoming the only men’s player in the club’s history to have earned an Extraordinary Full Blue, the highest honor in sports at Oxford. Keeso also served as an infantry officer in the armed forces reserves and ran in a federal election.

A native of Listowel, Ontario, Keeso played hockey in his hometown before joining the Huron-Perth Lakers AAA organization and continuing on to Jr hockey with the Listowel Cyclones, Strathroy Rockets, and Sarnia Blast of the Greater Ontario Junior Hockey League (GOHL). He then went to Boston to study at Wentworth Institute of Technology, where he was a goaltender for the varsity NCAA Division III hockey team and graduated with a BSc in Technology Management with honors.

“Having grown up in the game of hockey, I understand the opportunities for growth that youth sports provide for young people, on and off the ice, field, and court,” said Keeso. “Team members at TPH are deeply committed to the holistic development of student-athletes, knowing that the skills and habits learned extend well beyond the game to many other arenas of life. As a result of Nathan’s leadership and an all-star team of people, we have a great foundation in place as we head into ‘The Next 20’ at TPH.”

If you are interested in learning more about our #StudyTrainPlay model at the TPH Center of Excellence, Alan and other key members of our team will be participating in a Nationwide Virtual Open House on January 10th at 8:00 PM EST. Register for free here!